Brexit and the effect on the production Industry

The Financial Times has published an article in July 2017, what triggered our Customs Compliance Origin Specialist, Jolande van Ochten, to write a Brexit article from an Origin perspective.

Current- and after the Brexit situation

Non-preferential origin: for example a Certificate of Origin, which is a trade politics related document is often required for importing goods into a certain country. The basic rule for the non-preferential European Union (UK) origin is that the end product must have gone through the last substantial transformation in the EU (UK).

You can find the full ‘non-preferential origin guidelines’ determined by the Eurochambers here.

A Land Rover Discovery was the example in the article of the Financial times. The picture below gives a clear overview of the UK sourced parts and the imported parts sourced and originated in the European Union. 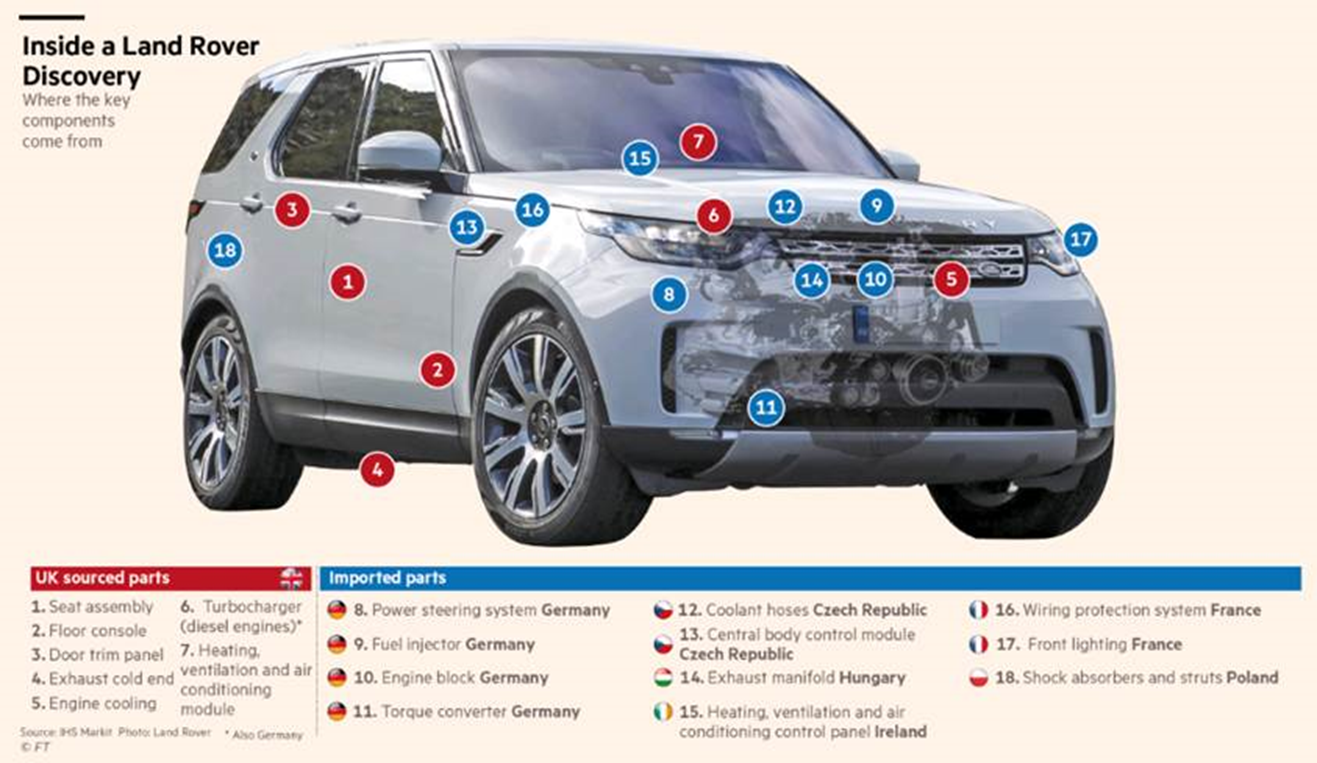 While the UK is still a part of the EU, the parts can be sourced within the EU without paying any duties. In the situation of a hard Brexit, parts and articles sourced from the EU will be considered as third party goods. This of course will also be the case when the EU imports from the UK.

The Brexit can lead to various scenarios. It can also lead to a Free Trade Agreement between the UK and the EU. Which, in all likelihood, will be bilateral or maybe on a PanEuromedian level or perhaps a construction like the EU has with Turkey.

A lot is still uncertain because of a lack of clear information. At this moment we can only guess and wonder.

The UK car producers can’t possibly buy every component needed to build a car in the UK.

This means that the parts, after the Brexit, imported from the EU, will be sourced from a third country. Which means that duties may be applicable. Duties on these parts will have an average of 4,5 %.

Within the EU there is a simplification regarding underlying proof of origin in the form of suppliers declarations. This enables companies to declare the origin of goods supplied to each other.

In this article I have spoken of how the car industry will be affected, but other products produced in the UK might have similar situations. Even though a lot is still uncertain it is good to know what might happen when the Brexit takes effect.

Click here to read the full article of the Financial Times “Brexit triggers a great car parts race for UK auto industry” which inspired me to write this article. It gives a clear overview of aspects the impact the Brexit will have seen from a production side of view.

When there is more clarification about the Brexit and the impact it will have we will let you know, keep an eye out on our website for news or sign up for our monthly newsletter and get the news directly in your mailbox.

3 min
Many changes in Intrastat thresholds for 2023